The documentary tries to take an incisive glimpse into the minds of people who make up the Greek neo-Nazi party, Golden Dawn.
The party’s almost non-existent electoral gains skyrocketed in 2012, in response, many argue, to deepening austerity, to 6 percent of votes and 18 seats in the Greek Parliament, gains that it has since maintained. In 2013, after a series of violent attacks that culminated with the murder of Pakistani worker Shahjad Luqman and Greek anti-fascist Pavlos Fussas, the party’s head and key members were charged with forming a criminal organization, and taken to trial, ongoing since April 2015.
The director, Angelique Kourounis, spent more than five years of filming Golden Dawn members in public events and private settings, including their own homes. Among other things, the film aims to show the continuities between the ideologies and practices of Golden Dawn and deep-rooted ideologies and structures of Greek society.

The film screening will be followed by discussion and cocktail 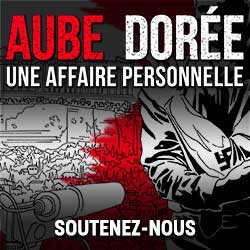